I was, I must confess, disgracefully hungover and sleep deprived; and I had, yes, already had something of a meltdown in the Kafka museum; but these things can, I feel, only provide a partial explanation for what happened on the Karluv Most bridge. It was early in the afternoon, around 12:30, as we left the museum and started the crossing. Straightaway, I noted a woman having her portrait drawn, a smile stretched grotesquely across her face as though it was intent on swallowing it. Further on, a spidery old man was playing an over-large accordion, and what appeared to be circus performers were blithely strolling in the midday sun. Yet, while these things all contributed to the surreal atmosphere, it was the dogs, the dogs wearing scarves, that truly did for me.

The walk along the bridge seemed to be unending. My feet moved, but I appeared to make no progress. The dogs, so many dogs, all the same breed, and all wearing scarves, passed by me at regular intervals. It was as though I was standing still, and they – the dogs – were going round in circles, were circling me, coming back around, time and time again. Where were they coming from? How could it be that ten or fifteen of the same breed had found themselves on the bridge that day? And why were they dressed so suavely? I have lost my mind, I suddenly thought to myself; then, gripping my friend’s arm, I asked him, straight-faced, with great seriousness: ‘You can see those dogs, can’t you?’

Thankfully, he could; but the point of this story is not the existence, or non-existence, of dogs, but rather to demonstrate something of the special atmosphere of Prague. It is a city, a beautiful city, that invites madness; it is a city of weirdness and wonder, where, one feels, or certainly I feel, anything is possible. It is not, I believe, a coincidence that much of the literature it has generated – The Maimed by Hermann Unger, for example – has that particular quality to it, as though the strange air of Prague has seeped into the pages. In this way, Gustav Meyrink’s The Golem held few surprises for me; which is to say that I expected odd, and odd is what I got.

“A brief rustling that broke off short, as if startled at itself, then deadly silence, that agonising, watchful hush, fraught with its own betrayal, that stretched each minute to an excruciating eternity.”

First published serially in 1913-14, The Golem is, on the surface at least, a gothic thriller. With little subtlety, but great relish, Meyrink turns Prague’s Jewish ghetto into a nightmare, with its ‘dark corners,’ ‘tomblike silence’ and generally gloomy, and threatening, atmosphere. It is a place where a ‘human spider’ with a hare lip [Aaron Wassertrum] lurks; and where a malevolent being, said to be the Golem, stalks the streets and the inhabitants, including the narrator, Athanasius Pernath. As one works one’s way through the book there are murders, robberies, secret rooms, inexplicable events, and suicide plots; there are references to cabbala and tarot; and all of this is great, dumb fun.

Yet there is, I believe, an underlying gravitas to the descriptions of life in the Jewish quarter. At the time that the novel was written it was, in fact, in the process of being demolished or cleaned up. For many years it had the reputation of being excessively dirty, over populated, and run down; and it was thought to be a hotbed of violence and criminal activity. With this in mind, Meyrink’s gothic thriller has perhaps more in common with Emile Zola’s theatrical naturalism than it does Lovecraft, Poe or Dracula. Moreover, this historical knowledge has the effect of altering the tone of much of what you read, so that when Pernath describes the houses as turning their backs on each other one sees in it, not something sinister, but something rather moving. Likewise, when he says of the inhabitants that they are ‘strange people’ who ‘seem to have been put together haphazardly, out of odds and ends.’ 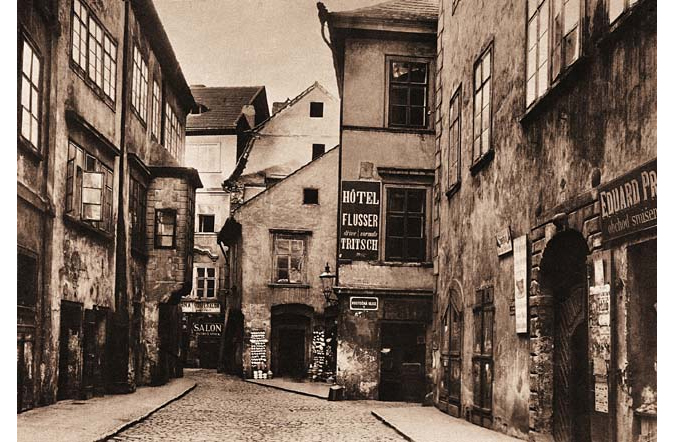 This is not to say that Meyrink, or at least his narrator, is entirely in sympathy with the people of the ghetto. Certainly, in the early stages I detected elements of anti-semitism, for there is obvious disgust in the way that Wassertrum and Rosina, for example, are depicted. Indeed, Aaron is said to have a ‘horrible face’ and ’round fish’s eyes’; he is a crook, who once sold a woman into prostitution. Rosina, on the other hand, is ‘repulsive’ and lascivious. Moreover, the evils of Wassertrum and his son are both linked to money, bringing to mind the Jewish stereotype of avariciousness. In contrast, the Czech characters, who are also living in poverty of course, are lovable rascals with hearts of gold. Yet, as the narrative progresses, Meyrink introduces Hillel and Miriam, who are positive Jewish characters; and this did go some way to soothing my concerns, especially as they are both self-denying and generous with money.

It is usually the case with these reviews that I spend a considerable proportion of them discussing the principle character[s], their motivations, psychology and personality. This is made more difficult in this instance, because Pernath is, for much of the novel, a man is search of himself, literally and spiritually. Indeed, at the beginning, he is handed a book with a prominent letter ‘I’ etched on it, which is not, of course, insignificant; and later it is hinted that the narrator may not be Pernath at all, having assumed this identity from a name in a hat he mistakenly picked up. In any case, he does not, we are told, remember anything about his childhood; there is the suggestion that he had some kind of mental breakdown, underwent hypnosis, and therefore repressed, or in some way lost, those memories, and with them his sense of self.

It is interesting, in this regard, that when we meet him he is alive, certainly, but could not be said to be living, as though one’s past enables one to have a present and a future. In fact, it is only when he starts to recover his memories that he takes an active part in life. He romances two women, for example, and forms deeper, more valuable friendships. However, I ought to point out that this is, I’m sure, not how Meyrink intended his novel to be understood. It is full of obscure mysticism, or ‘waffle’ if you were being uncharitable, which, based on what I know about the author and his interests, would likely mean that he had something more philosophically complex in mind. Moreover, if you have read the book you will know that I have completely disregarded the ‘twist’, and the questions it raises about the nature of reality, dreams, and so on. But well, fuck it, I most enjoyed The Golem as a story, not about a man’s spiritual awakening, but rather as about a man beginning to feel some joy in living.